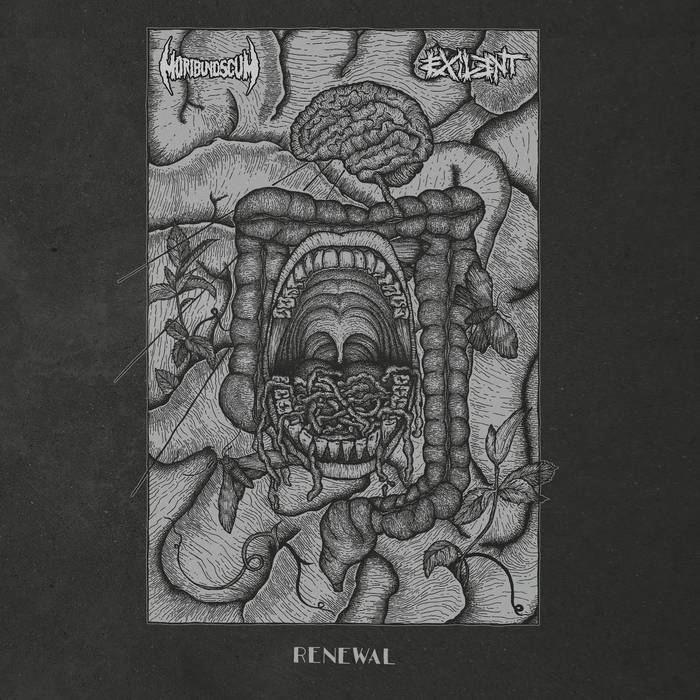 In 2011, Moribund Scum and Exilent shared the stage for the first time.
Many more shows followed, and we kept organizing events together
or for each other and still remember many evenings of deep and less
deep conversations, full of fun and jokes, as well as situations of
mutual support in difficult times. What started on musical grounds
became a close network of friends. This would not have happened
without the dedication of many more people than just ourselves.
At this place, we would like to say thanks to all people, projects and
crews who set us up, cooked and took care for us and all bands we
shared the stage with.
Thanks to Hütte, Falk and Role for recording and mastering, and to
all the labels and distros for the support and for making this release
possible.
Thanks to everybody who supported us over the last years,
especially to the Crews of Nexus and Klaue, to Wörn, Anja, Torben,
Floyd, Sophie, Smolle, Nicolas, Daniel, Goldi, Jako and Pierre, to
Mitschke and Grimnex, to Lonski, Hobbel, Paul, Lisa, the Bremen Punx
and the Friese, to Tammo and the Alhambra Crew, to Ina, Mike and the
JuZI Göttingen, to Bäppi, Klappstuhl and Nidhal, to Swana, Olli and
the AJZ Wuppertal Crew, to Dennis, Robbie, Daniel and the
Kastanienkeller, to Derelyction and the AK 44, to Kackschlacht,
Dueker, Hässelhoff, Call The Cops, Distress, Nocturnal Scum and
Auweia, to Aaarghfuckkill and the Lobusch Crew, to Trigger and the
Killed System Crew, to the oneeyedpunx and the Cyclopen, to Vicious
Irene, Johan, the Gothenburg Punx and the 128A, to Jedras and the
Rozbrat Squat, to the Stumpf and the Baracke, to Stiv and Victims of
War, to Lukas and Matthäus from Outside Fest, to Linas and the XI20,
to the La Jungla Crew, to Andreas, Oskar and Crutches, to the
Ungdomshuset, to Terry and the Bambara Crew, to Jossun and the
Hygget Crew, to Niklas from Arvika and to Onkiniemi and the
amazing Tampere family collective. Thanks to Teona, Gargarin and
Marianna, Fruszi, Gabor, Jasmina, Pavlina and Slavek, Bulli, Törtchen
and Enki, David von N. and the Hannover Punx (R.I.P Lutz).
Thank you for caring and organizing, for making us laugh, for
becoming and being friends.
You are awesome.

In remembrance of Paul.

For Booking and other questions contact us via moribundscum@gmail.com

If you any racist, sexist, antisemitic or homophobic tendencies, go fuck yourself! Thanks! ... more

Bandcamp Daily  your guide to the world of Bandcamp